We have an active oral immunotherapy program for children with anaphylactic food allergies. OIT has been shown to be effective and is an alternative to simple food avoidance.  We are currently treating children with peanut, tree nut, milk, egg, wheat and sesame allergies. The following are OIT FAQs.

Oral immunotherapy is a proactive treatment for food allergy that works by training the immune system to tolerate an allergenic food such as peanut. This is done by starting with extremely small doses of the food and carefully increasing the amount over a period of months until it can be eaten without a reaction.

Until recently avoidance of the food allergen was the only option available to patients with anaphylactic food allergy.  However, over the years, research from around the world showed that it was possible to safely “desensitize” a patient to a food allergen by carefully introducing it orally, using a variety of protocols. A small number of allergists around the country have now incorporated OIT into their practice due to the great need for this kind of treatment for patients with severe food allergy.  In January 2020, the FDA approved a commercial peanut product for oral immunotherapy, confirming the the safety and efficacy of an OIT product for the first time.

What is the OIT Process? 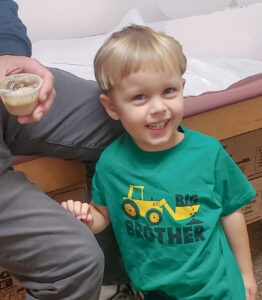 Karl has a peanut and tree nut updose with Dad.

Every patient is first evaluated to be sure they are candidates for oral immunotherapy. This consists of skin and blood testing and a history that indicates a definite risk for anaphylaxis. Then there is a discussion with the parents or individual to decide which foods should be treated.  This may be a single food, such as peanut, or up to three foods at a time. No patient is “too allergic” to be treated, and we routinely treat children with specific food IgE levels of over 100 ku/L (class VI) and/or history of multiple anaphylactic events.

At the first OIT visit, the patient is given a very small amount of the food and observed in the office for an hour to be sure it is tolerated. This dose is then given daily at home and increased every two weeks at an “updose” visit in our office.

Within 12 months or less the patient will usually tolerate the equivalent of one or two peanuts or tree nuts. The amount will differ for other food allergens such as egg or milk. Skin and blood tests will then be repeated to determine if the food sensitivity has decreased. If so, the escalation process can continue up to a full serving size.  Most of our patients will eventually be able to consume a serving size of the food, 10 to 20 peanuts in the case of peanut allergy.

What is the Goal of OIT?

The goal is to decrease the patient’s sensitivity to the food to the point that it can be eaten without a reaction. Some seeking OIT may just want protection against cross-contamination or the ability to consume foods with the “may contain” label. This is achieved by almost all of our patients within the first 12 months, with a 95% risk reduction while eating out. Most families also would like to have “bite-proof” protection—or the ability to be safeguarded against severe reactions from accidental ingestions of larger amounts.  Many desire the ability to “free-eat” where they can consume the allergen without restrictions.  Wherever possible, the OIT program be customized for each family’s goals.

What Foods Can OIT Treat?

Most of the studies have been done with peanut, but OIT can also be done for tree nuts, milk, egg, wheat and sesame. If the patient has more than one food allergy up to three foods can be treated at the same time.

How Effective is OIT? 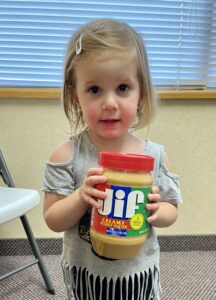 Grace has graduated from our OIT program and can eat two teaspoons of peanut butter now.

Peanut, milk and egg OIT have been shown to desensitize 70 to 80% of patients. In a recent study with a commercial peanut product in patients 4 to 17 years of age, 75% of patients could eat two peanuts by the end of a year. The success rate has been even more impressive in younger children.  A 2021 Canadian study reported that 98% of preschool age children were able to eat the equivalent of four peanuts after one year on OIT. This is in line with our own experience.

A majority of our patients go on to being able to eat a full serving amounts of the food being treated. In the case of peanut allergy, this means 10 or more peanuts or two teaspoons of peanut butter with no reaction.  Desensitization, however, is different from a cure, and requires continuing a maintenance dose to be effective in most patients. However some young children in our practice on OIT have seen their food allergy resolve. A recent NIH study of OIT on toddlers suggesting there is a window of opportunity to treat serious food allergies most effectively. Read the NIH study on OIT in children.

How Safe is OIT?

Reactions during OIT can occur but they are mostly mild, consisting of stomach upset or mild hives in our experience. However, more serious reactions including anaphylaxis can potentially occur.

Any updose is always performed in the office with observation for at least an hour. All medications are readily available to treat any reaction. Reactions have occurred  at home as well even with a previously tolerated dose, and parents must be familiar with their anaphylaxis plan and be prepared to treat in the case of an unexpected reaction.

Our updosing schedule is intentionally very gradual and is meant to minimize the chances of a reaction while achieving the same end result over time as more rapid regimens.

A very small percent of patients have been reported to develop eosinophilic esophagitis (EoE), an allergic condition of the esophagus that causes heartburn, vomiting or difficulty swallowing, but it is not clear that this was caused by OIT. This risk may be minimized by drinking fluids after the food dose.

Is OIT Covered by Insurance?

Most insurances cover OIT. Contact our business office if you have questions.

What are the Alternatives to OIT?

Avoidance of the food allergen is still the standard of care. Most allergists do not perform OIT although there may be more adoption of the treatment now that the FDA has approved a commercial peanut OIT product.

The downside of not doing anything, however, is that peanut and nut allergies tend to worsen spontaneously over time, so that a mild to moderate allergy may become severe. A number of studies have shown that OIT is safe and effective in pre-school  age children and suggest that OIT might reverse the allergic process.

Another benefit of OIT that should not be overlooked is that patients and families report a significantly improved quality of life after treatment. We will always discuss the pros and cons of OIT with the family.

Contact us for an Appointment
Food Allergies and Treatment